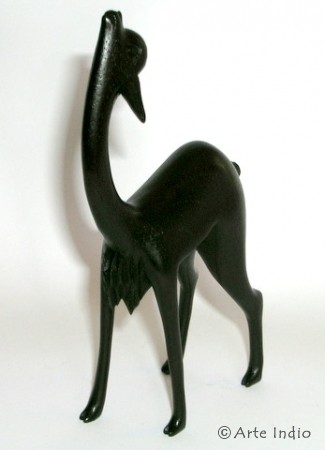 Vicuna made of cedar wood

These delicate animals were already sought after by the Incas because of the outstanding quality of their wool. However, since vicuñas perform an extremely complex mating ritual, which is inhibited or completely prevented in captivity, the animals were considered non-domesticable by the Incas. However, since pre-Columbian times, wild herds have been brought together and sheared every 2 to 5 years. The sheared animals were then released. And of course the Inca rulers got the fleece. Those who did not belong to the aristocracy and still wore vicuna wool committed a serious crime. No wonder that these beautiful animals still have a certain attraction for the Latin American artists and artisans of the indigenous peoples. These beautiful figures were made from cedar wood. Then the figures were stained and waxed so that they received their graceful dark color.

Vicunas are the most elegant of the four camel shapes of the "New World". They are sociable and social animals that live in herds of three to twenty animals and are led by an adult male who decides who belongs to the group. Their habitat is limited to the South American Andes at an altitude of 3,500 m to 5,750 m (Alpine tundra), above the tree line and below the snow line. The vicunas now live in southern Peru and Bolivia, in northern Chile and northwestern Argentina. In the past, the vicunas had a wider distribution area, possibly as far as Ecuador. His wool is considered the most expensive in the world. As a result, the animals feeding on grass and herbs were almost completely eradicated. Thanks to the strict requirements for the global trade in wool, there are now 150,000 animals again. However, vicuñas are still protected.

Related links to "Vicuna made of cedar wood"
Evaluations 0
Read, write and discuss reviews... more
Close menu
Customer evaluation for "Vicuna made of cedar wood"
Write an evaluation
Evaluations will be activated after verification.
Customers also bought Customers also viewed
Customers also bought
Customers also viewed
Viewed
This website uses cookies, which are necessary for the technical operation of the website and are always set. Other cookies, which increase the usability of this website, serve for direct advertising or simplify interaction with other websites and social networks, will only be used with your consent. More information
Decline Accept all Configure