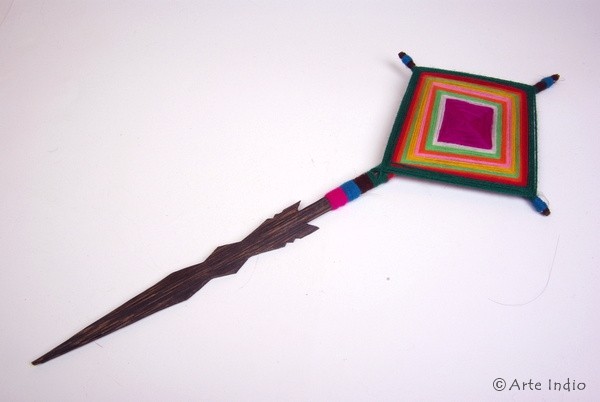 An often used ceremonial device of the shamans in South America is the "Chonta" (also called Tama). The Chonta is a 45-60 cm long, smooth stick made of the very dark wood of the Chonta palm. In many Indian cultures, all parts of this plant are worshiped. The “Chonta” is semicircular in diameter and tapers to one side. At the other end is an intricately carved handle.

The name “Tama” is derived from “Juan Tama”, who is also called the son of the stars or thunder or the thunder itself. He plays a major role in the belief system and is considered the head of the "good shamans". The chonta is used in the ayahuasca ceremony and in other ceremonies Connect to the spirits through the body of the shaman.

Things worth knowing about the Shipibo Indians:

The Shipibo Indians live in the Peruvian Amazon lowlands on the "Rio Ucayali", a source river of the Amazon. The Shipibo people comprise approximately 28,000 people. They live mainly from agriculture (cassava, maize, bananas and various tubers) as well as from hunting and fishing.

In addition, the Shipibo Indians are a people of artists. They are known for the richly ornamented pottery, clothing and carvings that the Shipibo women manufacture. You work as potters, weavers or fabric painters while your men are out hunting. They even decorate all of your household and utensils with these patterns. These recurring characteristic patterns are called "quené". Many scientists are convinced that there is more to all of these patterns than just ornamental advice, as these ornaments also play a very important role in the shamanism of the Shipibo. You are certain that these geometric and graphic structures are the result of Ayahuasca influence and, moreover, represent a kind of writing and medium with the other reality. Ayahuasca shamanism is still cultivated by the Shipibo Indians and is guarded as a valuable legacy of ancient Indian wisdom.

The Shipibo produce man-sized ceramic vessels in which cassava beer is fermented, which must not be missing at any Shipibo festival and is poured in large quantities. The drinking vessels for the cassava beer are also relatively large. The size of these vessels is intended to emphasize the generosity of the Shipibo society that hosts the festival.

Related links to "God's Eye - Chonta"
Evaluations 0
Read, write and discuss reviews... more
Close menu
Customer evaluation for "God's Eye - Chonta"
Write an evaluation
Evaluations will be activated after verification.
Customers also bought Customers also viewed
Customers also bought
Customers also viewed
Viewed
This website uses cookies, which are necessary for the technical operation of the website and are always set. Other cookies, which increase the usability of this website, serve for direct advertising or simplify interaction with other websites and social networks, will only be used with your consent. More information
Decline Accept all Configure